Roaring football fans on the way to a Saturday afternoon game drowned out a more hidden group that was also travelling into central Krakow on 18 May. Continuing a 15 year tradition, the annual “Marsz równości” (Equality March, hosted by Queerowy Maj) was about to begin. Krakow is situated in the Małopolska (Lesser Poland) region, known to be one of the most conservative parts of Poland, with a regal history and strong church traditions, so I was curious and slightly apprehensive to see how the event would pan out.

The atmosphere was fantastic when we reached the square in front of the National Museum and everyone quickly relaxed. Three ‘platform’ trucks blasted out music, with thousands of rainbow flags and organisation banners lighting up the entire area. After weeks of spring rain, the sun was out and people were visibly having a great time, painting each other’s faces, catching up with friends and trying not to overheat. Organisers of the event estimated that there were over 10,000 marching – a record in the event’s short history.

It was certainly a more political event and protest than the typical ‘Pride’ type celebrations I have seen in Western Europe. Banners called out for tolerance, protection and respect. With European elections days away, some local MEP candidates from liberal parties also took the chance to make speeches – advocating tolerance and rights. Local authorities including the city’s President reportedly declined invitations to join the event, but the Vice President of Warsaw was present and gave a speech to the crowd. There was also a minute’s silence for a young, trans woman and friend of several there, who had taken her own life the day before after complaining of feeling abandoned by many in the legal, medical and education systems.

As the media was quick to report, it’s true that it was a young crowd but there was some diversity, with a good gender balance and with many families, older people, foreign residents and tourists joining the march. The sight of severe-faced and armed, riot police with shields and batons did not dampen the mood as the crowd began to proceed along the main boulevard, town to the River Wisla and Wawel Castle.

Many residents of nearby buildings – including grannies, stag do tourists and nuns – waved from balconies and huge crowds of onlookers gathered along the route, right into the heart of the Old City. A group of middle-aged women from a ‘parents and friends organisation’ got a particular cheer from the marchers, carrying supportive slogans and quotes from them to their children.

The march was not universally welcomed, however. Reportedly there were around 15, small ‘counter protests’ organised by far right and nationalist groups all over the city, but the only sign we saw of them was a brief encounter in the corner of the Main Square towards the end of the 5km march. There were probably around 50 adults – including younger people and some women. The opposing groups were kept apart by the armed police and there was no attempt at physical assault or of breaking this barrier from what I saw. 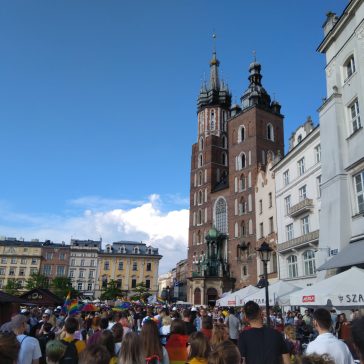 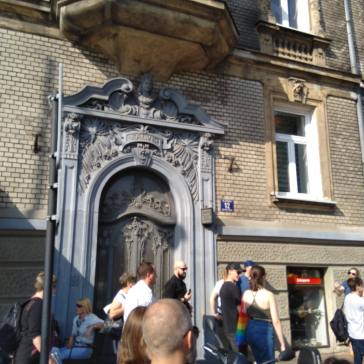 Most Poles I have met are quick (almost defensively, knowing the external image) to point out that these are marginal groups, which some say are driven to rebellion by poor socioeconomic conditions rather than by true ideological objections. The ruling party is broadly frosty on LGBT issues and many of its representatives have recently used anti-LGBT rhetoric as part of a wider strategy to stir up populism in the name of protecting national identity and values. The EU has also sometimes stepped in (suiting the ruling party’s depiction of an overpowering EU) and many foreign embassies in Poland make an explicit effort to support LGBT people in light of recent abuses. Poland is deeply divided on this issue – despite the external image of deep conservatism, recent surveys suggest that less than a half of Poles specifically object to gay marriage in Poland (with 38% in favour and 16% undecided).

Politics aside, it was a really positive experience and the atmosphere in Krakow spectacular. The marching crowd was peaceful and brought a sea of colour to a city that is just waking up from a cold winter.

One thought on “Pride and prejudice?”